Perhaps you have noticed that the Ladies are a bit mysterious as to their identities?

Do you want our real Bio & Electronic Press Kit ? Just get in touch and we’ll send it ASAP! 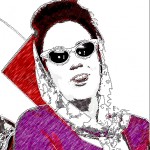 NANCY (rhythm guitar/vocals) learned how to sing harmony while doing the dishes with her sisters, who literally fought over vocal parts.  Not only did the loser get soaked, but she also had to sing the man’s part.  Nancy eventually moved from the sink to the parochial school choir.  She soon realized that nuns do not spontaneously burst into song or carry acoustic guitars on their backs. She remains proud of her spiritual side, however, and before going on stage communes privately with whatever spirits are handy. 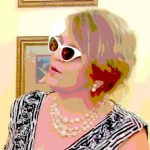 BEATRICE (Bea – bass/ukelele/vocals) began her singing career in the bathtub and eventually moved to the backyard, where she staged musicals with her sometimes uncooperative pets.  She discovered the hard way that cats do NOT like clothing, so she moved to the church choir.  After being silly one too many times, Beatrice was asked to explore her faith at a religious institution a bit further down the road. She took her bass with her. 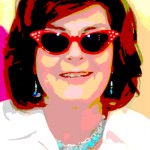 MADGE a.k.a. Chris Anderson (harmonica/lead guitar/mandola/percussion/vocals) had her debut as a musician in the 1950s as she sang along with members of the Mickey Mouse Club. Though she watched faithfully on TV, she never received ears of her own. She still has a thing for men named Cubby.  She’ll sing harmonies if she has to, but has been involved in several bands where other singers “accidentally” fell off the stage. She has been caught more than once boosting the level on her own microphone.

Alas! Ladies Done Waiting is no more... But Chris Anderson is now performing as a solo artist and with Harried Americans Roadshow.